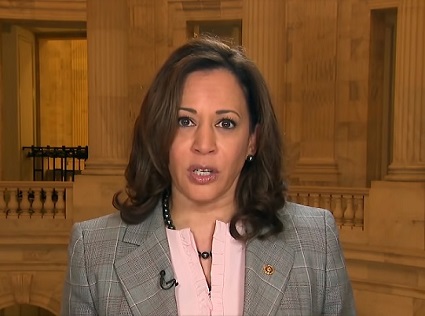 Harris, in an attempt to derail Judge Kavanaugh’s Supreme Court confirmation vote says that Christine Blasey Ford who has accused Judge Kavanaugh of attempted sexual assault in spite of the fact that she can’t remember the date, year, location, etc. surrounding the alleged assault should not be forced, correction bullied into testifying.

In other words, Judge Kavanaugh who is by law, innocent until proven guilty, because he is a (white) male.  Therefore, he has no right to due process since allegations of a sexual assault purported to have occurred thirty-six years ago, details of which continues to evolve are levied by a woman who is a Democratic operative must be taken as face value.

Ford is refusing to testify until after an FBI investigation.