As the Islamic Republic Fails, Renewed Interest in Zoroastrianism, Iran’s Ancient Faith
“Over the past few decades, Iran has seen a revival in the native religion that predates Islam—something that the ayatollahs desperately want to suppress,” the Israel Project’s Zenobia Ravji stated… 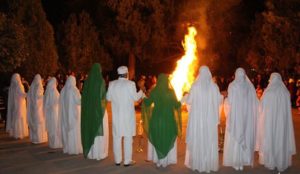 “Over the past few decades, Iran has seen a revival in the native religion that predates Islam—something that the ayatollahs desperately want to suppress,” the Israel Project’s Zenobia Ravji stated in 2016. Iran’s modern Islamic Republic has continued the historic antagonism of Iran’s various Islamic rulers towards Zoroastrianism, whose often illustrious past began some 3,500 years ago in ancient Iran.

Indiana University Professor of Iranian studies Jamsheed K. Choksy has explained how Zoroastrianism took its name from the faith’s founding prophet Zarathustra. Known as Zoroaster in the West, he preached sometime between 1800 and 1000 BCE about concepts including god and the devil, good and evil, and a final judgment for all humanity. Because such theologies later appeared in Judaism, Christian, and Islam, the Iranian-American expatriate Amil Imani has noted that Zoroastrianism has been “often called the mother of all revealed religions.”

Imani has called Zoroastrianism “one of the most benevolent and beautiful religions of all humanity,” given the “great Zoroaster’s triad of Goodly Thoughts, Goodly Speech, and Goodly Deeds.” Choksy likewise has seen this goodness in the ancient Persian emperors Cyrus the Great (reigned 559-529 BCE) and Darius the Great (reigned 522-486 BCE). These monarchs, who ruled during the millennium in which Zoroastrianism was the official religion of Persian imperial rulers, freed Jews from their sixth-century BCE Babylonian exile and helped rebuild the Jewish temple in Jerusalem. Zoroastrianism prominently marked biblical history again as Zoroastrian clergymen, magi, became famous as the wise men who visited Jesus’ nativity.

Observers of Zoroastrianism such as Choksy have starkly contrasted its benign characteristics with the Islamic repression that has marked Iranian history since Arab Muslim invaders overthrew Iran’s Sassanid Empire in 641. “Until Arabs conquered Iran during the seventh century, Zoroastrians, Jews and Christians there could practice their own devotions unhindered,” he wrote.” Subsequently these faith communities “became minorities who were persecuted and largely converted to Islam.”

Imani has angrily condemned that the “upstanding Iranian people who lived by” Zoroastrianism “stood no chance against Muslim beasts” who fanatically and brutally imposed Islamic theocracy. Examining numerous oppressive sharia measures throughout Iranian history, Choksy noted in 2015 in the online Encyclopædia Iranica humiliating requirements for Zoroastrians and others, including the wearing of distinctive clothing. He described how even as late as 1865, travelers to Iran observed that “Zoroastrians were required to follow essentially demeaning medieval rules for non-Muslim protected minorities.” Jihad Watch read more