How a 2020 Democrat Victory (God forbid) could pave the way for Islam’s U.S. takeover 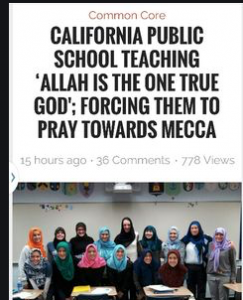 It’s no secret that the Islamization of Europe that is well underway, but what about the potential Islamization of America? If the latter sounds implausible — and I’m sure a great many people view it that way — consider what might happen if the already Islam-sympathetic Democrat party wins the next presidential election…or the one in 2024.

That party has already demonstrated that it’s willing to back agendas that are both radical and socially destructive.  For example, on January 25, candidate Joe Biden tweeted, “Let’s be clear:  transgender equality is the civil rights issue of our time.”

Islamic activist groups such as CAIR and ISNA have already positioned themselves as civil rights organizations. They claim that the population they represent has been victimized by discrimination, unjust immigration policies, and hate crimes. What’s more, American Muslims also happen to belong to a worldwide community of believers which numbers 1.7 billion people. And the vast majority of the global Muslim community care nothing about the rights of the transgender community.

Should Democrats prevail in November, Elizabeth Warren’s little transgender friend, Jacob, could get kicked to the back of the bus — if not under the bus.

To be sure, liberals have already expressed their support of Islam in various ways. One poll revealed that two-thirds of Democrat voters consider Islam to be no more violent than Christianity.

And, as we have seen, liberal judges backed by liberal politicians have blocked every attempt by the current administration to ban Muslim migration from certain countries.

Moreover, American educators who have been happy to affirm and promote radical views of gender and sexuality won’t hesitate to promote Islam’s radical ideology. In fact, they’ve already begun to act as advocates for Islam. Bare Naked Islam read more

1 Response to How a 2020 Democrat Victory (God forbid) could pave the way for Islam’s U.S. takeover