Iran, Hezbollah Use Mexican Drug Cartels to Infiltrate US

Keep in mind democrats, liberals are in favor of open borders and bringing more Moslem invaders to the United States.

Iran, Hezbollah Use Mexican Drug Cartels to Infiltrate US

Iran, Hezbollah Use Mexican Drug Cartels to Infiltrate US
Iran and its terror proxy Hezbollah are financing Mexican drug cartels, smuggling people into America and recruiting them (for pay) as sleeper jihadist cells. The recruits are mainly immigrants to… 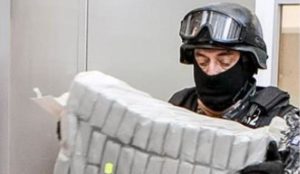 Iran and its terror proxy Hezbollah are financing Mexican drug cartels, smuggling people into America and recruiting them (for pay) as sleeper jihadist cells.

The recruits are mainly immigrants to Mexico from the Middle East, mostly from Lebanon where Hezbollah is based.

The coordinated operation is part of Iran’s war on America.

While Iran and Hezbollah are known to be active in the drug trade further south in Latin America, many are unaware that Iran, through its proxy Hezbollah, finances money laundering operations and human smuggling through the Mexican drug cartels at the U.S. border.

The operation is founded on the known fact that the U.S.-Mexican border is easy to penetrate, with tens of thousands of illegal immigrants and asylum seekers from Mexico and other Latin American countries coming into the U.S. from Mexico every month.

In southern Chiapas in Mexico, there are Muslim communities. These communities are made up of Syrians and Lebanese who migrated to Mexico decades ago as well as recent Mexican converts to Islam. In addition, Islam is gaining a foothold and in southern Mexico, with indigenous Mayans converting by the hundreds.

These communities are funded in the Diaspora and all contain sleeper cells. With the help of Mexican drug cartels, they finance and traffic extremists to the United States.

For example, Ayman Juma, a Lebanese citizen linked to Mexican drug cartels and involved in the drug trade in Latin America and Mexico, is a member of the Hezbollah. He is also associated with al-Qaeda.

Juma has smuggled tons of drugs from Mexico to the United States. The money made is partially used to fund terrorism, especially to prepare terrorist attacks against Israel as well as Hezbollah’s activities in America.

Hezbollah also managed to smuggle 200 illegal Lebanese immigrants through Mexico to America. All of them are part of a network of Iranian and Hezbollah supporters. Jihad Watch read more

1 Response to Iran, Hezbollah Use Mexican Drug Cartels to Infiltrate US