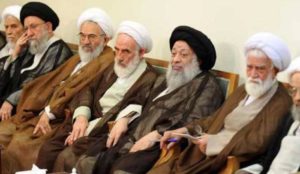 Iran is run by a collection of clerical gerontocrats who are fanatical in their faith. Unfortunately, their faith has not been enough to see them through the coronavirus. Their Supreme Leader is Ayatollah Ali Khamenei, who confidently told his countrymen on March 2 that the coronavirus was “not that big a deal” and soon would pass. He was wrong on both counts, and now Iran is the epicenter of the disease for the entire Middle East, and the third hardest-hit country, after China and Italy, in the world.

The panicky reaction of the Iranian rulers, who do not know where to put their feet and hands, has unsurprisingly led them to denounce, not their own incompetence, but the Infidels – the European Union and the United States — for not lifting sanctions on, and for not sending money to, Iran. You can just hear them: “Why are you Infidels so cruel? When have we ever shown you anything but kindness?” (Yes, let’s forget about all those “Death to America” and “Death to Israel” demonstrations.)

The story is here.

In an interview with the Spanish newspaper La Razon, Hassan Qashqavi — the Islamic Republic’s ambassador in Madrid — railed against the “cruel and inhumane” sanctions imposed by the US following its 2018 decision to leave the nuclear deal with Iran that was agreed with the previous Obama administration.

The “sanctions” are neither “cruel” nor “inhumane.” They constitute a reasonable attempt to convince the Iranian rulers to do two things: first, to stop sending money and weapons to the Houthis in Yemen, to the Shi’a militias in Iraq, to the terror group Hezbollah in Lebanon and – Iran’s most costly intervention by far – to Assad in Syria; second, to discontinue work on their nuclear program, and to open for inspection the three sites that Iran had kept hidden from the IAEA, but that were revealed in the trove of documents Israeli agents whisked out of Tehran in 2018. Jihad Watch read more