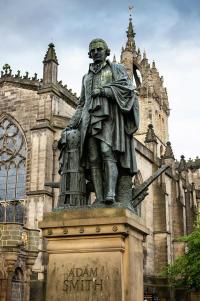 From The American Spectator:

As free trade and markets are increasingly vilified today by the political Left and Right alike, the ideas of Adam Smith, author of the famed Wealth of Nations and sometimes called the Father of Capitalism, are also tarnished.

It’s worth noting that many of the modern criticisms of markets — the most common being that they promote greed, inequality, and materialism — aren’t new. They are, in fact, criticisms that Smith himself anticipated and answered in his works. Looking especially to insights found in the book that made him famous in his lifetime, The Theory of Moral Sentiments (TMS), we can learn much about Smith’s concern about the social, moral, and political dangers of the excesses of markets today and the importance of personal virtue in preventing them.

“The profit motive fogs the thinking of free-market advocates,” critics claim. In allowing…