Going Broke in an Expanding Market

Chicago legalized recreational pot over the new year. Ordinarily, I’d be outraged, and part of me is, another part of me thinks it hilarious.

The best authority to what is going on in Chicago, Second City Cop obtained a couple of receipts. Here they are 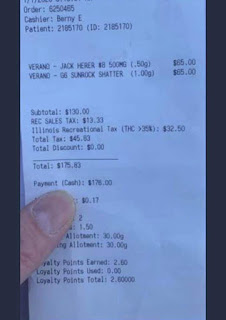 Now, to be honest, I have no idea of street prices for marijuana. I’ve many weaknesses, but not this one. $80± a gram seems high to me, but what do I know is that imposing taxes of $76 on a sale of $225, an effective rate of over 30%, that the dealers on the street do not pay, is not a competitive advantage.

Illinois prosecutors, because they will not prosecute crimes far more serious than this (including gun violence and even mass killings) have long since legalized the street vendors and you can bet that they can (and will) more than meet these prices…

1 Response to Going Broke in an Expanding Market