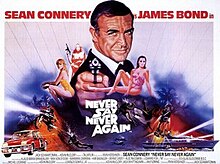 Never Say Never Again is a 1983 American spy film starring Sean Connery and directed by Irvin Kershner. The film is based on the James Bond novel Thunderball, which was previously adapted in a 1965 film under that name. Unlike the majority of Bond films, Never Say Never Again was not produced by Eon Productions, but by an independent production company (wiki)

Because Of This, It Haven’t Been Integrated In The James Bond Franchise. But It Is A James Bond Film And A James Bond With The One And Only For Hard Core Fan : Sean Connery..

One Simple Thing Is That James Bond Is A Lady’s Man, Not A Man Dress As One. There Are All Sorts Of Speculations On The Future Of James Bond. Personally I See Very Well Jude Law As James Bond.
The View Of His Promotions For…