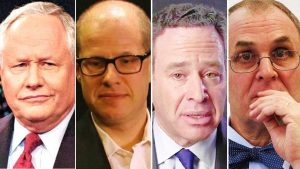 Julie Kelly has an article up at American Greatness. Let’s take a look.

For more than two years they misled us.

Exploiting fear and confusion after a shocking event, they warned that our country was in imminent danger at the hands of a mad man. They insisted that legitimate intelligence, including a CIA report issued a month before a national election and a dossier producedby reliable sources in the United Kingdom, proved the threat was real. The subject monopolized discussions on Capitol Hill, in the White House, and in the press.

They argued that the situation was so dire that it was straining our relationship with strategic allies. Any evidence to the contrary was readily dismissed. And anyone who questioned their agenda was ridiculed as a coward, a dupe, or a conspiracy theorist. The news media dedicated