Declaration of Conscience II: Once again a female Senator from Maine offers a fracturing Senate and nation a chance to step back from the abyss 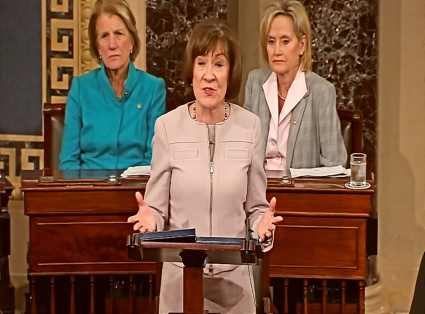 Republican Senator Susan Collins is under attack due to her “yes” vote that put Judge Brett Kavanaugh over the final lap toward becoming the next Supreme Court Justice. on Saturday  Collins’ speech which spoke to the rule of law, advise and consent touched on many issues leading up to the moment was not only compelling but historic.

If she is not remembered for anything else, Collins will be remembered for her performance on the floor of the U. S. Senate prior to the final vote confirming now Supreme Court Justice Brett M. Kavanaugh.

Sixty-eight years ago, on June 1, 1950, in a nation tearing itself apart over the Joseph McCarthy accusations regarding Communist infiltration of our government, the Senate’s first female senator, Margaret Chase Smith of Maine, rose to deliver an historic speech on the Senate floor, a speech that has become know as A…