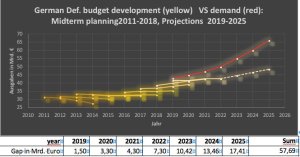 Joe Sylvester over at The Federalist has an article yesterday about the welfare state called NATO. It’s rather interesting.

It has been 27 years since the collapse of the Soviet Union, but American foreign policy has not evolved to fit the new world. We have more military bases in Europe than we did post-World War II. There seems to be no coherent answer as to the necessity of such bases and, worse, no justification of the burgeoning costs.

Who are these bases designed to protect? Which European countries have an actual or even a perceived threat of foreign invasion, and by whom? Why can’t economic powerhouses such as Germany provide for their own defense?

In short, Germany can, but won’t. Agreements among North Atlantic Treaty Organization (NATO) nations stipulate that if one member is attacked, the others must come to their aid. This agreement acts as a one-way insurance policy…