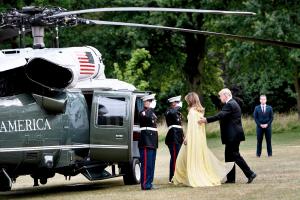 So, this week (and a busy one it’s been) has been the Supreme Court, the witchhunt, NATO, and Trump in the UK. They’re all related.

The Court comes down to Constitutional issues, all else is simply a screaming match. The American Spectatorputs it well.

Lost is this kind of debate is what should be its proper focus: a debate over governmental structure. In short, we are increasingly losing sight of what our Constitution actually is.

Our federal Constitution is in form a governmental charter (as are state constitutions, but leave them aside here). The Framers of 1787 had studied history intently, and derived lessons from earlier efforts to form a just government, from ancient Greece and Rome to the Articles of Confederation.

Thus, its first three Articles divide powers into legislative, executive, and judicial. Legislators make laws; the executive administers and enforces them; and the judiciary interprets…