ASIDE from historical revisionists, the none too educated, irredeemable leftists, and outright fascists, few are unaware that Hitler rose to power via a democracy. By extrapolation, it was within a highly liberal constitutional system that democratic principles were used to undermine, in turn, and destroy the nation’s democratic underpinnings. Said foundation was implemented in 1919 as an outgrowth of Germany’s defeat in World War One. Strikingly, it was under this freedom-based government that Hitler, a monster by any human barometer, arose to power. As is known, the rest is (Holocaust) genocidal history.

WITH said backgrounder set in stone, it must be internalized that Hitler (history’s Jew-killers in toto) was completely in sync with centuries of Islamic Jew-hatred. Kindred spirits. 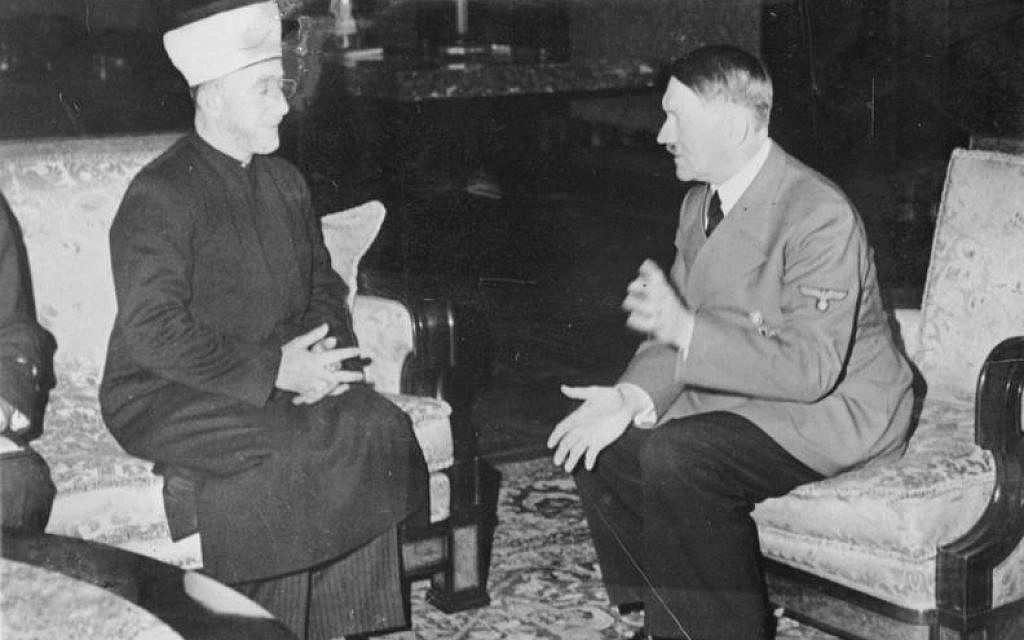 SO much so, it is an absolute historical fact that Hitler hosted the Grand Mufti Haj Amin al-Husseini in 1941 in Germany – birds of a (Jew-hating) feather….

A new discovery by the National Library of Israel has brought the ties between the mufti and the Nazis back into focus. The archive found a 1943 telegram from Nazi SS leader Heinrich Himmler to Husseini, written in German. The timing of the telegram is significant: It was sent on November 2, 1943 and marked 26 years since the British government issued the Balfour Declaration expressing its support for the establishment of a Jewish homeland in Palestine. (This November will mark the declaration’s 100th anniversary.)

The Himmler telegram reads: “To Grand Mufti Amin al-Husseini: From the outset, the National Socialist [Nazi] movement of Greater Germany has been a standard-bearer in the battle against world Jewry. For this reason, it is closely following the battle of freedom-seeking Arabs, particularly in Palestine, against the Jewish invaders. The shared recognition of the enemy and the joint fight against it are creating the strong base [uniting] Germany and freedom-seeking Arabs around the world. In this spirit, I am pleased to wish you, on the anniversary of the wretched Balfour Declaration, warm wishes on your continued fight until the great victory.”

It was signed by Himmler as SS commander of the entire Third Reich.

BUT for those who believe that the above has nothing to do with them, well, Christians (and other minorities) across the Middle East and Africa would beg to differ. Yes, with at least 215 million Christians persecuted, mostly by Muslims, and with countless slaughtered by Allah’s Muslim Terrorists, ask yourselves: is this just a “Jewish problem?”

AND atop it all, the bodies of so-called infidels are piling up throughout Europe, and with no end in sight. In reality, Merkel’s and HUSSEIN’s Islamic handiwork will continue to bloody the west via blow back after blow back, and for decades to come. Knock-on effects.

SO, ponder this too: how alarmed should non-Muslim Europeans be, in light of unrelenting Islamic barbarism against Jews in France – the most recent being the slaughter of Holocaust survivor Mireille Knoll, 85?

STILL yet, for those who feel the need to roll their eyes, here’s an actual experiment:

The 21-year-old victim, an Israeli Arab, caught the assault Tuesday on video and posted it on Twitter, where it went viral, accentuating growing anti-Semitism in Germany amid a massive influx of immigrants from Muslim nations.

The Syrian man whipped the Israeli, identified as Adam Armoush, with a belt while shouting “Yehudi!” or Jew, in Arabic, the video shows, reported the Israeli daily newspaper Haaretz.

Armoush told the German broadcaster Deutsche Welle he wore the traditional Jewish skullcap as an experiment. He explained he decided to wear the kippa after a friend told him that wearing one in Germany was unsafe, noting he refused to believe it.

“I’m not Jewish, I’m an Israeli, I grew up in Israel in an Arab family,” he said.

Noting the rise in anti-Semitism in Europe, Haartez said Jewish students have reported anti-Semitic bullying in schools in recent months and Israeli flags were burned during a recent protest in Berlin.Last week, Germany’s most important music prize was given to a rap band that includes the line “my body more defined than Auschwitz inmates,” drawing outrage from government officials.

Across Europe, especially among youth, “Jew-hate is the new cool,” said Abigail R. Esman, who writes from the Netherlands and New York for the Investigative Project on Terror.

In January, she wrote, an alleged arson attack took place at a suburban Paris kosher supermarket on the third anniversary of the terror attack at the kosher Hyper-Cacher market outside of Paris in which a Muslim terrorist killed four people after a standoff.

Among the attacks in France in 2017, a Jewish woman was killed by a Muslim neighbor who pushed her out a window, and a Jewish family was robbed and held hostage.

“You’re Jews, so where is the money,” the assailants allegedly said.

Sweden also has seen a disproportionate number of anti-Semitic attacks recently, Esman said. In December, Muslims hurled Molotov cocktails at Jewish teens at a synagogue party in Gothenburg, and firebombs were planted at a Jewish cemetery in Malmo.

At a Stockholm protest against President Trump’s call to recognize Jerusalem as Israel’s capital, the New York Times reported, a speaker called Jews “apes and pigs,” a common anti-Jewish epithet.

And in Malmo, according to the Times, children at a Jewish kindergarten played behind bulletproof glass.

INCONTESTABLY, Europe is on fire (the west at large), and Mohammedans are the arsonists!! BUT as always, you know things have gone from bad to worse, pointedly, to hell in a hand-basket, when French dignitaries and stars (many of whom tilt to the left, the so-called “elites”) feel compelled to raise the alarm. Mind you, since self-preservation comes to mind, perhaps it became a collective motivator. Hmm.